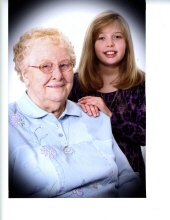 Ruby B. Funk, age 87, of Greenville passed away Sunday, June 12, 2016 at her home. Funeral services will be held Thursday, June 16, 2016 at 10:30 A.M. at Young Funeral Home. Burial will be in Fairlawn Cemetery in Vandalia, IL. Friends may call Wednesday, June 15, 2016 from 5-7 PM at the funeral home. Memorial contributions are suggested to Bond County Hospice or The Greenville First Baptist Church.

Ruby was born December 31, 1928 in Shobonier, IL to Jesse W. and Hallie (Blankenship) Zimmerman. She married Charles Herbert Funk on June 19, 1948 in Vandalia, IL. He died July 6, 2007. She is survived by her children Pam Funk of O’Fallon, IL and Randy Funk and his wife Karen of Randolph, NJ. She is also survived by a sister Bonnie Donnals of Vandalia, IL one grandchild Ashley Funk. She was preceded in death by her husband, a son Terry Funk, and a grandson Daniel Funk.