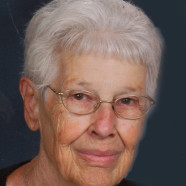 She was born March 27, 1934 in St. Rose to Henry and Cecilia (Bach) Ripperda: they preceded her in death.

In addition to her husband, she was also preceded in death by a daughter, Marie Kuhl; a granddaughter, Jessica Hope Kuhl; a son-in-law, Brad Deien; and brothers, Louis, Lawrence, Valerius “Larry”, Alfred, and Paul Ripperda; and sisters-in-law and brothers-in-law, Hilda, Dolores, Mary Ann, and Thelma Ripperda, Clara and Joseph Wuebbels, Walter and Jane Kuhl, John Musenbrock, and Ben Musenbrock.

Bernice was a member of St. Dominic Catholic Church and formerly worked in assembly at Arrow Group Industries in Breese and housekeeping at the Breese Nursing Home. She enjoyed to walk, quilt, and bake, but especially loved spending time with her children, grandchildren, and great-grandchildren.

Memorials may be made to Heartland Hospice, St. James Villas Activity Fund, or to the Alzheimer’s Association and will be received at the funeral home.