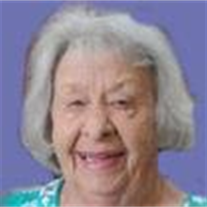 She was born on Sunday, August 21, 1932, in Manila, AR, the daughter of William and Effie (nee Hughes) Glisson.

On Monday, October 25, 1948, at Blytheville, Arkansas, she married Martin A. Whitworth, Sr.

She was a member of Salem United Church of Christ, Alhambra, IL.

Mrs. Whitworth was born and reared in Manila, Arkansas. She had lived in California, St. Louis and then Granite City, IL. The family moved to Alhambra, IL in 1959 where she and her husband operated a farm northeast of town from 1959-1985. After her husband’s death she later moved into town. In addition to helping on the farm, Betty had also driven a school bus for the former Ramsey Bus Service; worked at Oak Brook Golf Course; and helped her son with this pharmacy (Medicine Shop). She was always helping someone. She enjoyed her children, grandchildren and great-grandchildren in their many activities. A great cook, there were always meals at grandma’s house. Betty enjoyed and was lucky playing the slots.

Memorial contributions may be made to HSHS Hospice; Salem United Church of Christ; or American Cancer Society.