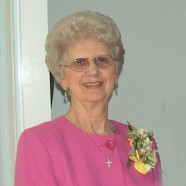 She was born December 20, 1928 in Bartelso to Henry and Cecilia (Jansen) Becker: they preceded her in death.

She married Paul Dierkes June 7, 1955 at St. Cecilia Catholic Church, Bartelso and he survives in Breese.

Flo worked as a cashier at Joe Beer Grocery Store in Bartelso for several years, and was a seamstress in Centralia and Brueggemann Drapery in Bartelso. She enjoyed sewing, and quilting. She and her husband enjoyed traveling, having traveled to Hawaii and Alaska, Canada, and all over Europe including Italy, France, Turkey, England and Germany where they meet relatives of both the Becker and Dierkes families.

Memorials can be made to Heartland Hospice, Hospice of Southern Illinois, Alzheimer’s Association and will be received at the funeral home.

American Legion Auxiliary will hold services on Tuesday at 7:00 p.m. at the funeral home.