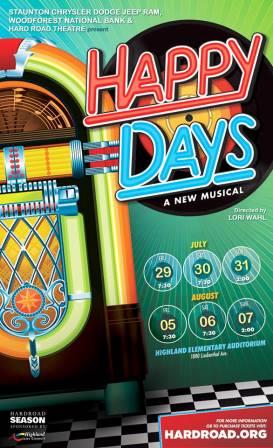 It’s time to say goodbye to gray skies and hello to blue as Hard Road Theatre in association with the Highland Arts Council and sponsored by Woodforest National Bank and Staunton Chrysler-Dodge-Jeep-Ram rock around the clock and present the new musical Happy Days! Based upon the hit TV series of the same name and written by TV series creator Garry Marshall with music by Grammy and Academy Award-winning composer Paul Williams, the musical follows the characters (Ritchie, Potsie, Ralph Malph, Joanie, The Fonz, etc.) of the beloved hit TV series during the spring of 1959. Arnold’s, the famed drive-in malt shop and number one hangout, is in danger of being demolished. In attempt to raise money to save Arnold’s from being destroyed, the Happy Days gang holds a dance competition and a televised wrestling match. Even Pinky Tuscadero, Fonzie’s childhood sweetheart, returns to help and she and Fonzie rekindle their old flame.

Director Lori Wahl knows audiences will love the production and hopes that it “evokes fond memories from their childhood, high school years, or just of the TV show.” She said she was drawn to the script because of her own memories of the TV show and listening to the golden oldies music of the 1950s and 1960s. A New York Times reviewer said of the musical, “If you’re going to make a stage musical out of a television show, Happy Days is not a bad choice. All that cheerful white-bread 1950s innocence. All those instant audience associations with beloved characters and the actors who played them.” For fans of the TV series, there are several allusions and jokes that will reward those who listen carefully.

HAPPY DAYS has a cast of around 25 individuals including Mitch England as The Fonz, Amanda Juenger as Pinky Tuscadero, Weston Holzinger as Richie Cunningham, Kenzie Holzinger as Joanie Cunningham, Joshua Miller as Ralph Malph, Devonn DeLong as Potsie Webber, Tim Albaugh as Howard Cunningham, Carrie Henrichs as Marion Cunningham, Jonathon Beavers as Chachi Arcola, Linda Collman as Count Malachi, Mary Knebel as Jumpy Malachi, and Tom Varner as Arnold Delvecchio. The show is directed by Lori Wahl and assistant directed by Breanna Noe with musical direction by David Wilton and choreography by Dylan Stanley with assistance from Ashley Crane.

Performances for HAPPY DAYS are July 29, 30, Aug. 5 and 6 at 7:30 p.m. and July 31 and Aug. 7 at 2:00 p.m. All performances will be held at the Highland Elementary Auditorium located at 1800 Lindenthal Ave., Highland, IL. Tickets are $12 each (children 3 years old and younger are free). Tickets can be purchased online or at the door. Online ticket purchases stop 30 minutes before the scheduled show time. Seating is on a first come, first serve basis.