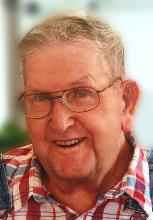 Henry Franklin Dieckmann, age 92 of Keyesport, passed away at the Carlyle Healthcare Center on Wednesday, July 13, 2016.

Expressions of sympathy in memory of Mr. Dieckmann are suggested to the Salvation Army, Keyesport United Methodist Church, Hospice of Southern Illinois, or to the charity of the donor’s choice and they will be accepted at Zieren Funeral Home. Online condolences may be sent at www.zierenfuneralhome.com.