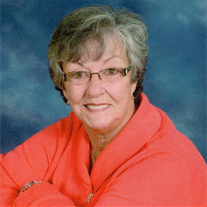 She was born on March 07, 1942, in Highland, IL, the daughter of Wilbur and Nelda (nee Kesner) Grotefendt.

She was a member of Grantfork United Church of Christ.

Janet was born in Highland and grew up on the family farm Northwest of Grantfork, Illinois. She was a graduate of Highland High School, class of 1959. Drove a school bus for 15 years for Ramsey Bus Service while raising her children. She moved to Troy, IL and started working as a Rural Carrier for the U.S. Postal Service, starting in 1979 and retiring in the early 2000’s, She moved back to Highland in the late 1990’s. She enjoyed cross stitching and crafts. She also loved visiting with her daughters and grandchildren. She played cards with 2 groups and liked playing dominos.

Funeral service will be at 10:00 AM on Tuesday, July 19, 2016, at Grantfork United Church of Christ in Grantfork, IL., with Rev. Tim A. Darmour-Paul officiating.

Memorial contributions may be made to Grantfork UCC or Amyotrophic Lateral Sclerosis (ALS).