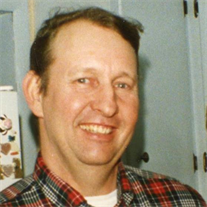 Funeral services will be held 11:00 a.m. Saturday, July 9, at Mt. Gilead Cumberland Presbyterian Church with Rev. Ward Sussenbach officiating. Interment will follow in Mt. Gilead Cemetery. Visitation will be held Friday from 5:00 p.m. – 8:00 p.m. at the Donnell-Wiegand Funeral Home in Greenville. Memorials may be made to Mt. Gilead or Helia Healthcare.

L. Jack Jahnssen, the son of Frank Howard and Cornelia Elizabeth Gillespie Jahnssen, was born on July 7, 1943 in Vandalia, Illinois. Jack grew up near Pocahontas, attended the Shawnee and Pocahontas Schools and graduated from Greenville High School with the class of 1961.

Jack served our country in the United States Army. He enlisted in the Army on May 25, 1965. Jack served overseas and received the Overseas Bar, Marksman Medal, National Defense Service Medal, Vietnam Campaign Medal, and the Vietnam Service Medal. He was honorably discharged on May 24, 1971.

Jack and Ingrid D. Davis were united in marriage on July 19, 1969 at Mt. Gilead Church. They enjoyed 37 years together before her passing on August 19, 2007. They are the parents of two daughters, who both survive, Stephanie P. Jahnssen of Greenville and Heather J. Bray of Greenville. He was also the grandfather of two: Jordyn Bray and Quinton Bray.

Jack was one of six children, surviving are John Jahnssen of Ballwin, Missouri and Charlotte Byington of Mt. Vernon, Illinois. He was preceded in death by siblings; Lloyd Jahnssen, Guy Jahnssen, and Joseph Jahnssen.

Jack worked for Laclede Steel for more than 30 years and then worked for American Steel in 2003. He enjoyed the outdoors, fishing, traveling and watching St. Louis Cardinals baseball.