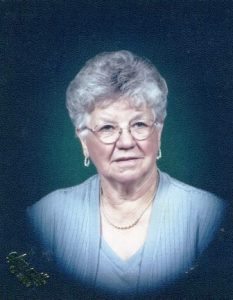 Mary was born October 31, 1922 to Perry and Irma (Hediger) Schmollinger at their home in Central Township. She married Edward W. Ulmer on February 7, 1941 in Beaver Creek. He died September 14, 2009. She is survived by her children Judy Debatin of Greenville, IL, Jane (Dennis) File of Springfield, IL, and James (Lisa) Ulmer of Greenville, IL, her grandchildren Jim (Ruth) File of Springfield, IL, Denise (Travis) Blaney of Rochester, IL, Angie (Jeff) Ulmer of Greenville, IL, and Marianne (Paul) Peterson of Cary, NC. She is also survived by two step-grandchildren Cory (Sarah) Fisher of San Diego, CA, and Kelsey Fisher of Dwight, IL, along with her great grandchildren Kayleigh and Carson Blaney, Ava Peterson, Luke Peterson, Emilia Peterson and Bailey Fisher. She is also survived by a sister-in-law Mary E. File of Glen Carbon, IL. She was preceded in death by her husband and a sister Helen Stinson.

She grew up in Central Township and graduated from Greenville High School. After her marriage she and her husband farmed south west of Greenville. She was a member of The Smith Grove Baptist Church and The Hospital Auxiliary. She had also served as a 4-H Leader