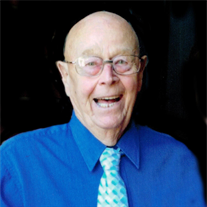 Orville was born in Alhambra, IL. Orville attened the one-room Hoxey School and later attended Alhambra High School. He was employed by Richard’s Brick Co. of Edwardsville as a crane operator for 43 years. He worked part-time as Water and Sewer Superintendent for the village 17 years and was a member of the Village Board. He later attended classes at SIUE and received a water and waste water operator’s license. Orville served during the Korean conflict in the US Army, 1951-1953, with duty in Germany.After marrage they lived in Alhambra Township, in 1972 moved to Alhambra, and then to Highland in 1999. He had been Youth Fellowship Advisor, Sunday School Teacher at Salem UCC. He also had been a Boy Scout Leader. He loved to work in his flower garden and was a regular “Nature Boy”, he also did wood working. He enjoyed being in-on-near water; loved his family and camping at Crab Orchard Lake.

Funeral service will be at 10:00 AM on Saturday, July 16, 2016, at First Congregational Church of Highland in Highland, IL., with Rev. Greg S. Brady officiating.

Memorial contributions may be made to First Congregational Church.