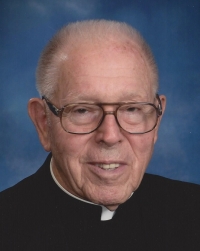 Reverend Schmidt graduated from Quincy College (now Quincy University) and Kenrick-Glennon Seminary in St. Louis, MO. He was ordained as a Catholic priest in the Springfield, IL Diocese on May 27, 1950.

As Father Schmidt was growing up in a large Catholic family, he looked up to his mother (the late Frances Schmidt) and she was very instrumental in his life, as were his siblings. In fact, he shared his vocation with his slightly younger brother, Father Carl Schmidt, who went through the seminary with him.

Father Schmidt’s first assignment was as assistant at St. Mary Parish in Alton from 1950-1954. During the rest of the 1950’s until the early 1960’s he was also assistant at Saint Peter and Paul in Springfield and then at St. John the Baptist in Quincy. He was pastor of St. Patrick in Grafton and St. Michael in Beltrees from 1962-1969. In 1969, he became pastor at the parish he called home for 25 years, St. Lawrence Parish in Greenville. He loved the priesthood and all of the parishes that he served. Father Schmidt retired from full-time ministry in 1994 at age 70.

Being an uncle to his sibling’s many children, Father Schmidt has baptized many nieces and nephews and has celebrated family wedding Masses as well. He had a special devotion to the Divine Mercy. Father Schmidt loved to travel the world, and fly an airplane when he had the opportunity.

It wasn’t until 2009 that he moved to Quincy so that he could live close to his youngest sister, Virginia Drew.

He is survived by his siblings, Robert (Barbara) Schmidt of Citrus Springs, Florida, Rev. Carl Schmidt of Effingham, IL, Rosemary Pankratz of Lucedale, MS, Joseph Schmidt of Quincy and Virginia Drew of Quincy along with a sister-in-law, Josie Schmidt of Collinsville, IL. Numerous nieces and nephews also survive.

He was preceded in death by his parents, a brother Laurence Schmidt, brothers-in-law Bill Pankratz and John T. Drew and sisters-in-law Thelma Schmidt and Mary Schmidt.

A Memorial Mass will be concelebrated with Bishop Thomas John Paprocki on Saturday, July 9, 2016 at 10:30 a.m. at the Cathedral of the Immaculate Conception in Springfield, IL. Father Schmidt had requested that his body be donated to St. Louis University for medical research. Masses may be given in his memory or memorials may be made to the Retired Priests of the Springfield Diocese. Arrangements in care of the Duker & Haugh Funeral Home, Quincy.