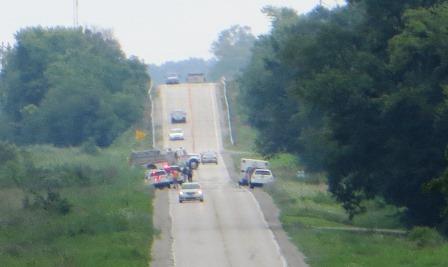 Two people were injured in a single-vehicle accident on Route 40, west of the Smithboro overpass, Tuesday morning.

According to the Bond County Sheriff’s Department, a car driven by Betsy Yates of Greenville was westbound on Route 40. A deputy said Yates passed another vehicle and when she tried to return to the westbound lane, she allegedly lost control of the car and it left the roadway.

The officer said the vehicle appeared to have rolled over multiple times, coming to rest on its top near the railroad tracks.

Yates was able to get herself and her four-year-old son out of the vehicle. Both were taken by Bond County Emergency Medical Services ambulance to HSHS Holy Family Hospital in Greenville for treatment of injuries.

The deputy said the child was in a car seat and the driver was wearing a seatbelt. The driver’s side air bag deployed.

The sheriff’s department was notified of the crash at 9:59 a.m.