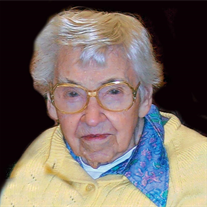 She was born on Saturday, October 07, 1911, in Pocahontas, IL, the daughter of Philip and Louisa (nee Willy) Gruen.

She was a former member of the First Christian Church, Marine, IL and Marine Senior Citizens.

Mrs. Gibbs was born in Pocahontas, Illinois and grew up in Millersburg, Illinois. After she was married, she lived in Pocahontas and then moved to Marine, Illinois in 1934. She enjoyed cooking and sewing.

Funeral service will be at 10:00 AM on Thursday, July 14, 2016, at Spengel-Boulanger Funeral Home in Highland, IL., with Rev. Will VerDuin, Associate Pastor, Evangelical United Church of Christ, Highland, IL, officiating.

Memorial contributions may be made to Charles Gravius Memorial Library, Marine, IL.