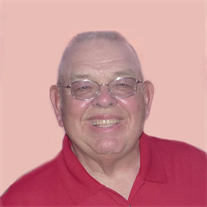 On April 24, 1965, he married Marjorie Ann Abert at Salem UCC in Alhambra, IL She survives in Rural Alhambra.

Tom was born in Highland and graduated Highland High School in 1962. He was an All Conference Football Player. He served in the US Army Reserves from 1962 to 1968. He had worked at Genteman Chevrolet, and General Steel in Granite City for 10 years. Then worked at Granite City Steel for 31 years, retiring in 2002. He also farmed north of Alhambra since 1965. He raised crops, hogs and sheep He raised rabbits in his youth. Tom has shown his sheep at state and county fairs since 1962. Through his efforts, he arranged for Granite City Steel todonate all the tin for the exhibition barns at the Madison County Fair Grounds. He restored antique tractors in his spare time and displayed them at the Highland Power Show at the Louis Latzer Homestead. Tom owns a number of antique John Deere Tractors and a McCormick Deering Tractor that his grandfather, George Glassmaker purchased new from Robert Dauderman Farm Equipment in 1926. He sold seed corn for 40 years and was recognized as Trail Blazer Dealer of the year by Funks G-Hybrid. He was always involved with Boy Scouts – Eagle Scouting. He was Scout Master in Grantfork for many years and several of his scouts made Eagle Scout. He was a big sports fan. He watched Cardinal Baseball, Rams Football, and high school, college and professional sports.

Funeral service will be at 11:00 AM on Thursday, July 07, 2016, at Salem United Church of Christ in Alhambra, IL., with Rev. Jerry Amiri officiating.

Memorial contributions may be made to St. Jude Children’s Research Hospital; Alhambra Fire Dept.; or Charity of the Donor’s Choice.

No Hearing Needed For City Levy

County Board Members To Be Sworn In Tuesday