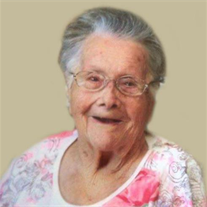 She was born on Thursday, May 26, 1921, in Granite City, IL, the daughter of Peter and Henrietta (nee Grawe) Stieb.

Born at Granite City, IL; attended Sacred Heart Catholic School, Granite City. She lived in the greater metro St. Louis area; later lived in the Keysport/Carlyle area in her retirement. As a young lady she was a telephone operator in Alhambra and worked in a factory. She later owned and operated a restaurant/tavern in Pierron; Pinckneyville; Keysport; all going by the name “Bud’s Place”. She enjoyed crochet, cooking, canning, spending time and helping with her grandchildren.

Memorial contributions may be made to St. Mary’s Catholic Church.