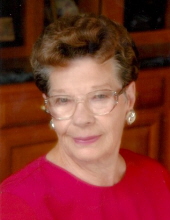 Algera May Row, age 87, of Branson West, MO passed away Monday, August 8, 2016 at Tablerock Healthcare Care in Kimberling City, MO. Funeral services will be held Friday, August 12, 2016 at 1 PM at Young Funeral Home. Interment will be in Mt. Moriah Cemetery. Friends may call Friday after 11 AM at the funeral home. Memorials can be made to the charity of the donor’s choice

Algera was born April 6, 1929 to Owen and Laverna Compton in Montgomery County, IL. She is survived by her sons Douglas Row of Austin, TX and Edward Row and his wife Jeri of Branson West, MO. She is also survived by three brothers David Compton and his wife Barbara of Litchfield, IL, Clay Compton of Litchfield, IL, and Herbert Compton and his wife Linda of Hillsboro, IL. She is also survived by a sister Gladys Cordova of Coffeen, IL., seven grandchildren and five great grandchildren. She was preceded in death by a sister Winifred Compton and three brothers Camby Compton, Walter “Bobby” Compton, and Charles Compton.

She worked for 30 years at LaSalle Steel as a custodian before retiring. She moved to Branson, MO where she lived with her son Edward Allen Row also known as Allen Edwards, and worked in the gift shop of his show room in Branson, MO. She was member of Our Lady of The Cove Church in Kimberling City, MO. She loved her family, her work and she loved Christmas.