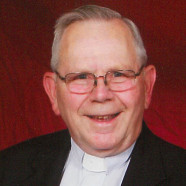 In addition to his parents, he was also preceded in death by a sister, Mary Ann Lippert; and his father-in-law and mother-in-law, William and Mary, nee Schmittling, Remelius.

He worked as the Audio/Visual Coordinator for the Collinsville Unit 10 School District retiring in 1996 after 26 years.

His educational achievements include earning his B.S. in Psychology with a Minor in Philosophy and Communications in 1961 from St. Louis University, and later receiving his Master’s Degree in Pastoral Services from Loyola University in New Orleans, LA in May of 2005.

Deacon Bob was a member of St. Anthony Catholic Church in Beckemeyer, Breese Knights of Columbus Council 2869, and the Knights of Columbus 4th Degree Bishop Althoff Assembly. He formerly served as the Treasurer of the North Central Vicariate and was a former member of the Cathedral of St. Peter in Belleville where he was involved with the Cathedral Players Guild from 1954-1999 serving as Director for his final 25 years of membership. Deacon Bob also founded the Halloween Haunted Houses at the Cathedral Athletic Club in 1962, and reassembled “The Power” at the Shrine of Our Lady of the Snows in Belleville after it was transported from the Knoxville World’s Fair.

Deacon Bob was fun loving and a true people person, he loved telling Boudreaux and Thibodeaux jokes, and was an avid St. Louis Cardinals Fan.