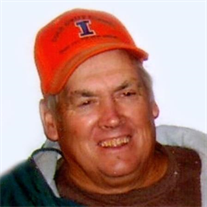 Duck Netemeyer, 68, of Albers, died Monday, August 8, 2016 at St. Joseph Hospital in Breese. He was born May 2, 1948 in Breese, the son of Alvin and Rita (Kues) Netemeyer. He married Shirley Fuehne on February 15, 1969 at St. Damian Catholic Church in Damiansville and she survives in Albers.

In addition to his parents he was preceded two brothers, Thomas and Joseph Netemeyer; his father-in-law, Cletus Fuehne; and three brothers-in-law, Jerry Lampe, Marc Hollenkamp, and Donald Joseph Fuehne.

Mr. Netemeyer was a farmer; a member of St. Bernard Parish in Albers, Clinton County Farm Bureau, Green Iron Club, and the NRA. Anyone who knew Duck never saw him without his Ranger and his Dewalt radio with Hayride playing.

Memorials may be made to the charity of the donor’s choice and will be received at the funeral home.

To send flowers or a memorial gift to the family of “Duck” Netemeyer please visit our Sympathy Store.