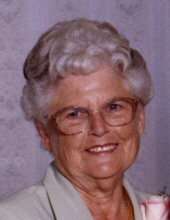 Edith E. Ingram, age 88, of Greenville passed away Sunday, August 14, 2016 at Montgomery County Nursing and Rehab Center in Taylor Springs, IL. Funeral services will be held Friday, August 19, 2016 at 10:30 AM at Young Funeral Home. Burial will be in Zion Cemetery. Friends may call Thursday, August 18, 2016 from 4-7 PM at the funeral home. Memorial contributions are suggested to Sweetbriar Retirement Center in Vandalia or St. Louis Children’s Hospital Oncology Department.

Edith was born on November 19, 1927 in East Carondolet, IL to William KcKinley and Rosalie Louisa (Kottkamp) Morris. She married Gene Robert Ingram on August 7, 1948 in Dupo, IL. He died May 5, 1997. She is survived by her daughter Jean Marie Lloyd and her companion Rob Robbins of Greenville, IL, her grand daughter Tara Lynne Joiner and her husband Justin of Greenville, and her great grandchildren Nori and Ceri Joiner. She is also survived by her step-sisters Barbara Marcheski and her husband Tom of Red Bud, IL and Teddee Howell and her husband Hugh of Iuka, IL, along with her step-brothers Jerry Berhoefer of Columbia, IL. She was preceded by her husband and three brothers Kenneth Morris, James R. Morris, and Edgar Morris.

She graduated from St. Mary’s Hospital School of Nursing in 1948. She moved to Greenville in 1951. She had worked for Dr. William Hall and Dr. James Goggin. She retired from Fair Oaks Nursing Home in 1993.