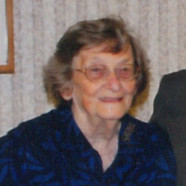 She was born December 25, 1923 in Grantfork to Adolph “Ed” and Emma (Kirstein) Landolt: they preceded her in death.

Mrs. Mannhard was owner of Mannhard Hardware in Trenton. She enjoyed her time with her grandchildren, gardening and bird watching.

Memorials can be made to Trenton Volunteer Fire Department and will be received at the funeral home.