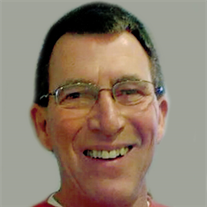 He was a member of Saint Paul Catholic Church. He was also a member of Knights of Columbus, Council #1471, Monroe, WI.

Eric was born and grew up in Mt. Vernon, IL. He graduated from Mt. Vernon High School in 1972. He attended Rend Lake Junior College and SIUE and received a BA in Business Administration. He began living in Highland while attending SIUE. He was a manager at the Highland Dairy Queen while in college. He had a long career in the lumber industry. He enjoyed golfing, mowing grass and played high school basketball. He was a “Master Chef” at grilling and cooking.

Private interment will be at Saint Joseph Catholic Cemetery in Highland, IL, at a later date.

Memorial contributions may be made to Saint Paul School Educational Foundation or The Charity of the Donor’s Choice.