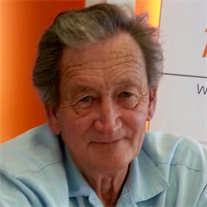 Fred I. Johnson, the son of Carl Fredrick and Violet Mennet Breckenridge Johnson, was born June 1, 1941 in Hot Spring, Arkansas. He grew up in Edwardsville, Illinois and attended the local schools. Fred graduated from Edwardsville High School. Fred and Harriett Rose Zoeller were united in marriage September 22, 1960. They had 39 years together before her passing in 2000.

Fred is preceded in death by his parents, wife Harriett and Sue’s son Chris Weiler in 2005.

In lieu of flowers, please make memorials to the family available at Donnell-Wiegand Funeral Home.

To send flowers or a memorial gift to the family of Fred Johnson please visit our Sympathy Store.