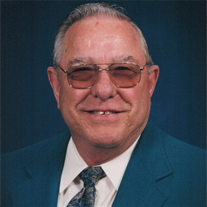 He was born November 09, 1931, in Highland, IL, the son of Fremont and Josephine (nee Goestenkors) Frey.

Jerry was born in Highland, IL and grew up in Pierron, IL. He graduated from St. Paul Highland School in 1949. He worked at Highland Box Board Co. He joined into the U.S. Army in April of 1952, with active duty during the Korean Conflict and earned the rank of Sergeant. After his honorable discharge in February of 1954, he joined his father with the milk hauling business. He purchased the business in 1964. He and his wife later purchased the Walter Merkle farm north-east of Highland in October 1959 and moved to the farm from Pierron on January 1st, 1960. Mr. Frey was most proud of their prize Charolaise Cattle during the 1960’s and 1970’s. They sold their herd in 1976. He retired January 1, 1995, from the milk business. He and his wife sold their home in August of 1999 and moved into the Faith Countryside Homes Complex-Retirement Village. He most enjoyed playing Bridge, Euchre and traveling to Alaska, Hawaii, Florida, and California. He loved St. Louis Cardinal baseball and watching his grandchildrens sports.

Funeral Mass will be at 10:00 AM on Wednesday, August 03, 2016, at Saint Paul Catholic Church in Highland, IL., with Rev. Father Pat G. Jakel and Father Gregory Spitz, officiating.

Memorial contributions may be made to St. Vincent de Paul Society or H.I.S. K.I.D.S.