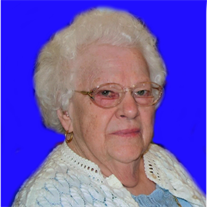 She was born on Wednesday, May 07, 1930, in Worden, IL, the daughter of Edward and Mary (nee Zirges) Barenfenger.

She was born in Worden, IL; graduated from Worden High School in 1948. She affirmed her faith through the rite of confirmation on April 18, 1943. After graduation she started working as a secretary for U.S. Radiator Corp, Edwardsville, IL, for one and half years. She then worked as an account/bookkeeper for Illinois Lumber Co., Edwardsville, (wholesale division) for 32 years. She then worked for the Department of Agriculture in Edwardsville as a program assistant for 9 years and retired in December of 1995. She lived on a farm near Prairietown until 1972 when she built a new home and moved to Alhambra, IL. She moved to Villa Rose Senior Living Community, Bethalto, in 2013. She enjoyed Polka dancing; reading; growing flowers; faithful in her faith; spending time with family and friends.

Funeral service will be at 11:00 AM on Thursday, August 25, 2016, at Saint Peter’s Lutheran Church in Prairietown, IL., with Rev. Dale A. Skeesick, Pastor, officiating.

Memorial contributions may be made to St. Peter’s Lutheran Church.