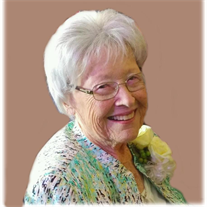 She was a member of Saint Paul Catholic Church. She was also a member of Helvetia Sharpshooters Society – Highland.

Mrs. Vosholler was born at St. Joseph Hospital in Highland; grew up on the family farm southwest of Highland and attended the Old Zobrist Country School. Prior to her marriage, she had worked at Wick’s Organ Company in Highland. Following her marriage, she and her husband lived and farmed on the Vosholler Family Farm east of Highland. They moved to their home on East Broadway in Highland in 1965. From the early 1970’s, the Voshollers operated F & J Disposal in Highland. For some 25 years, Mrs. Vosholler catered weddings and other large events in the community. She worked at the Highland Home since 1991 in the Dining Room and Kitchen. She and her husband were very active in Helvetia Sharpshooters Park (she oversaw the kitchen; he ran the dancehall). Mrs. Vosholler was a doll collector; she and her husband enjoyed dancing and fishing; she enjoyed playing cards, especially Euchre, and playing Bingo.

Funeral Mass will be at 10:00 AM on Thursday, September 01, 2016, at Saint Paul Catholic Church in Highland, IL., with Rev. Father Pat G. Jakel officiating.

Memorial contributions may be made to Helvetia Sharpshooters Society or Shriners Hospital for Children.