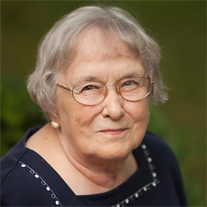 Joan Ellen Reeser, age 85 of Indianapolis, Indiana and formerly of Greenville, Illinois, passed away at her home on Friday, August 12, 2016. Joan, the daughter of Glenn Max Kurtz and Fannie Valier Johnson Kurtz, was born April 17, 1931 in Grand Rapids, Michigan. She grew up in Grand Rapids and graduated from Crestwood High School with the Class of 1949. Early in life, Joan felt the call to be a missionary nurse to Africa. Joan attended the Blodgett Memorial Hospital School of Nursing and
graduated in 1952. Joan attended Grand Rapids Junior College (MI) prior to attending Moody Bible Institute from 1952-1953.

Joan and Donald Marion Reeser met at Moody Bible Institute and were united in marriage on August 27, 1954 in Grand Rapids, Michigan. They enjoyed 49 years together before his passing on June 27, 2004. Joan and Donald served the Lord in ministry at the Bibelschule Bergestrasse (German Bible Institute) in Seeheim, Germany from 1960-1969 serving through Greater Europe Mission (Wheaton, IL). They moved back to Greenville where Joan worked in a doctor’s office and worked many years at Utlaut Memorial Hospital retiring as the Vice President of Patient Care in 1996. Joan helped her husband in ministry at the Bethany Baptist Church in Highland, Illinois from 1983-2004. She moved to Indianapolis in 2012 to be near her son.

Joan and Donald had three children: Donald Martin “Marti” Reeser and wife Lana of Indianapolis, Indiana, Renate Ann Moyers and husband William of Montello, Wisconsin, and Mari Ellen Reeser, who passed away on April 8, 2012. She is also survived by a brother James Kurtz and his wife Dawn of Grand Rapids, Michigan. She was the proud grandmother of Hannah Moyers, Zachary Reeser, Rebekah Moyers, Andrew Reeser, and Haley Reeser.

Memorial Service will be held on Saturday, August 27, 2016 at 12:00 p.m. with visitation from 10:00 am – 12:00 p.m. at the First Baptist Church, Greenville, IL. with Rev.William Moyers officiating. Burial to follow at Gullick Cemetery, Highland, IL. In lieu of flowers, the family requests that donations be sent to either Moody Bible Institute (Reverend Donald and Joan Reeser Scholarship) or Teach Beyond (Memorial Fund – Mari Ellen Reeser)