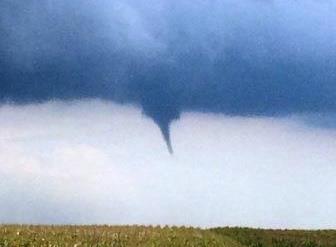 While the National Weather Service had been calling for a chance of scattered showers and thunderstorms, with the possibility of some of them being strong to severe, there wasn’t any kind of warning when a strong thunderstorm cell popped up in the southeast part of the county and a funnel cloud was spotted by many folks. Several submitted photos…

Thankfully the funnel cloud never touched down and other than heavy rain in some isolated areas, there was no damage to speak of.

There were no warnings or watches issued by the National Weather Service Friday afternoon.

Click below to hear Ryan Mifflin’s conversation with Sherry Schaefer, who had landed at the Greenville Airport just before the funnel cloud was spotted:

WGEL’s Dale Deverick was eating lunch near the Bond County Fairgrounds when the funnel cloud descended. He called in and told Mifflin what he saw: