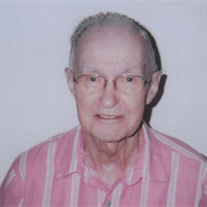 He was a member of Church of Christ-East Peoria, IL.

Mr. Pruett was born in Obion, TN where he grew up. He served with the U.S. Army Air Corp. from 1943 – 1945 with duty in Europe as part of the 8the Air Force. For over 35 years, he worked for Caterpillar Tractor Company in Peoria in Material Control. Mr. & Mrs. Pruett moved to Highland, IL in 2001. He moved to the Alhambra Care Center in April or 2016. Always very active in church work, Billy had served as deacon for many years at Church of Christ in East Peoria. He enjoyed working on and maintaining cars. Mr. & Mrs. Pruett loved to travel, it was always a big joy in his life. They enjoyed spending time with family, and Billy was always helping others.

Per Billy’s request, there will be no visitation or funeral services.

Memorial contributions may be made to Alhambra Care Center.