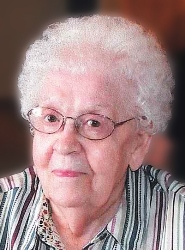 Catherine Von Hatten, age 92 of Breese and formerly of Beckemeyer, passed away at Breese Nursing Home on Monday, September 12, 2016.

Mrs. Von Hatten graduated from Carlyle High School and then worked at Wee Walker Shoe Factory. She was also a housekeeper at Carlyle Healthcare Center and helped at her daughter’s daycare business. Catherine was a member of St. Felicitas Church in Beaver Prairie and St. Anthony’s Church in Beckemeyer. She was always a devoted housewife, homemaker, and a great mom.

A Funeral Mass of Christian Burial will be celebrated at 12:00 Noon on Thursday, September 15, 2016, at St. Felicitas Church in Beaver Prairie with Fr. Lawrence Nickels, officiating. Visitation will be held at Zieren Funeral Home in Carlyle on Thursday morning from 9:00 – 11:30 A.M. Expressions of sympathy in memory of Mrs. Von Hatten are suggested to Mater Dei High School and will be received at Zieren Funeral Home.