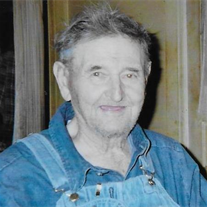 He was born in a log cabin on the family farm South of Hagarstown, IL, in Seminary Township.

“Always fought all through his life for the freedom & rights of the people.” And never ever forgot the boys that fought for our country.

In 1954 because of the drought he started selling cars at Paul Taylor Oldsmobile in Greenville, IL, later at Burtschi Chevrolet & Craycroft Ford, both in Vandalia, IL, and then a car dealership in Pana, IL.

He worked for Southwestern Electric in Edwardsville, IL, running the Davis trenchers that he had previously sold them.

On Oct. 14, 1940 he was struck by lightning and recovered. Three years later in 1943 he joined the U.S. Navy and was asked what the stripe was down his side, of which was lightning strike. He was later injured while in the Navy of which it took between 3 and 4 months for him to recover in the Navy hospital, of which before full recovery he worked with the doctors and nurses helping take care of injured solders at Great Lakes. He did not take and receive a pension at any time.

In 1949 he attended and graduated in the top of his class from Reisch Worldwide College of Auctioneering, the largest auction college in the world in Mason City, IA, of which in order to receive colonel rating, he had to take psychology and radio broadcasting among many other classes of which nothing could be written down on paper.

He was offered by the owner Mr. Reisch of the college, a job at a brand new state of the art livestock sale barn in Colorado, but did not accept and came back home to family.

He enjoyed working draft horses because he always said they were life out there in the field with him. He enjoyed his A.C. WC tractors he had all through his life.

Smoked for 87 years even up to the end, ever since the age of 7, said he would not have lived this long if he hadn’t, it calmed his nerves.