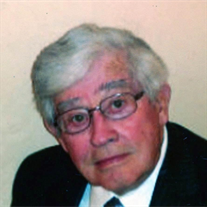 Delbert Catron, age 87 of Greenville, passed away at 8:33 p.m. Wednesday, September 21, 2016 at Helia Healthcare in Greenville.

Delbert Dean Catron, the son of Carl Lee and Nellie Hannah Collett Catron, was born May 27, 1929 in Cashion, Oklahoma. He grew up on the Catron farm near Cashion, attended the public schools and graduated from Central Academy with the class of 1947. Delbert attended Central College 1947-1949 in McPherson, Kansas. Delbert answered his country’s call by joining the United States Army on June 16, 1952 in Kansas City, MO serving overseas in Japan for 1 1/2 years during the Korean Crisis. Delbert was honorably discharged on May 26, 1954 at Camp Carson, Colorado. He was awarded the Korean Service Medal, the United States Service Medal, the National Defense Service Medal and the Good Conduct Medal. Delbert received his BA degree from McPherson College in 1956 and received his Masters from Emporia State in 1958. Delbert taught in McPherson County Schools, and 6th grade in Waterford township, Michigan, later becoming Principal. Delbert did graduate study at Wayne State for 2 years, and in 1963 moved to Greenville where he taught in the Education Department at Greenville College. Delbert then taught in the Psychology department, became Dean for one year, then was the Chair of the Psychology department for 10 years. Delbert was the Vice-President of Student Development, and for the last 10 years, the Director of Teacher Education, retiring in 1994.

Delbert was a Master Gardener, enjoyed reading, he and Lois have traveled extensively in all 50 states, enjoyed cruising many lakes and rivers in their cabin cruiser, and traveled to 60 countries. Delbert was a member of the Greenville Free Methodist Church.