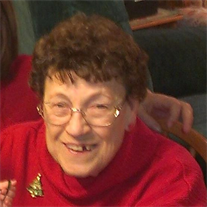 Funeral services will be held at 11 a.m. Thursday, September 15, 2016 at the Donnell-Wiegand Funeral Home for the immediate family and church friends with ministers Boyd Goodson and Mark Turock officiating. Interment will follow in Posey Cemetery south of Carlyle on Rt 161.
Visitation will be for church friends and the family at Donnell-Wiegand Funeral Home from 10 a.m. Thursday morning until service time. For those who desire memorials in Delores’s memory may be made to the Greenville Church of Christ or to St. Jude’s at Donnell-Wiegand.

Delores Diana Wilson, the daughter of Ralph Dean Wilson and Laverne Trape Wilson, was born on February 13, 1939 in Granite City, Illinois. Delores grew up in Clinton County attending the one room country schools and Carlyle High School. Delores raised her family in Clinton and Bond County and worked at DeMoulin Brothers for over 30 years retiring in 2007. Delores enjoyed camping, birds, flowers, her grandchildren and great-grandchildren.

Delores and Clarence G. Miller were united in marriage on March 10, 1958 in Carlyle and enjoyed over 37 years together before his death on November 7, 1995. They are the parents of four children who survive: Dale (Brenda) Miller of rural Smithboro, Stella Miller of Sorento, Dennis (Dianne) Miller of North Augusta, SC, Roscoe Dean (Natalie) Miller of west of Greenville, 16 grandchildren, 23 great-grandchildren, and 5 sisters: Yvonne Andrews of Gulfport, Mississippi, Janice Grayling of Posey, Gloria Boyd of Galax, Virginia, Laura Wilson of Greenville,and Lynn Yennie of Baton Rouge, LA.

Delores is preceded in death by her parents, her husband Clarence, a grandson, and two great-grandchildren Noah Lindley, Wyatt Lindley, and three brothers: Floyd Wilson, Paul Wilson, and Gary Wilson.

Delores was a member of the ladies garment workers Union at Demoulin’s and had served as steward, and was an active member of her Church, the Greenville Church of Christ.