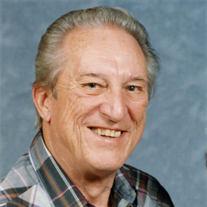 Funeral services will be held at 2:00 p.m. Wednesday, September 7, 2016 in the Donnell-Wiegand Funeral Home in Greenville with Darryl Bolen officiating. Interment will follow in Taylor Cemetery south of Pittsburg with Full Military Honors by American legion Post 282 and V.F.W. Post 1377 both of Greenville. The family will receive friends from 4 until 7 p.m. Tuesday at Donnell-Wiegand. For those who desire memorials in Eli’s memory may be made to the Greenville Bowl Memorial in Memory of Eli Heffron being set up by Eli’s family.

Eli Edsel Heffron, the son of Roy & Gladys Heffron, was born on September 8, 1932 in Detroit, Michigan. Eli attended the Detroit Schools and graduated from Greenville College. Eli continued his education by attending SIU Edwardsville receiving his Masters in Education several years later. Eli taught grade school in Bethalto, Il. for 2 years, Mulberry Grove from 1962 until 1964, and in Shobonier from 1964 until his retirement in 1989. In retirement Eli and Maxine enjoyed RV Camping and he was an avid Bowler.

Eli and N. Maxine Cook were united in marriage on October 1, 1955 in the St. Jacob Church by his brother-in-law Rev Dick Howe. Eli and Maxine have enjoyed over 60 years and she survives as do their two children: Michelle Ann (Arden) Cook of Vilonia, Arkansas, Kevin Alan Heffron of Johnson City, Tennessee, two grandchildren: Shannon Tally of Greenville, William (Ashley) Cook of Vilonia, AR, and three great-grandchildren: Abby Cook, Erin Cook, and Abel Cook. Eli is also survived by his only sister Gladys Jean Damesworth of Waverly, Tenneesse.

Eli is a member of the Greenville First Christian Church.