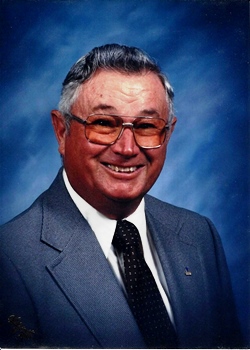 Jewel Alvin Jenne, age 86 of Carlyle and formerly of Altamont, passed away Tuesday September 20, 2016 at Highland Health and Care Center.

Jewel was born on January 26, 1930 in Wheatfield Township, Carlyle, Illinois, to William and Adele (Hildebrandt) Jenne. Jewel was confirmed at Messiah Lutheran Church in 1944. He attended elementary school at the Jenne Schoolhouse located on Jenne Road. Jewel graduated from Breese High School in 1948 and was involved in agriculture all his life. He began as FFA Youth Ag Adviser for Clinton County when he was 18 years old. He attended the University of Illinois and graduated with a master’s degree in education.

Jewel married Geraldine Stilt on August 24, 1952 at Immanuel Evangelical Church in Carlyle, IL. He taught high school biology and agriculture at Newman High School for two years and Altamont High School for six years. Jewel later worked as a salesman for A.O. Smith Harvestore for twenty years. In 1984, Jewel retired from sales and returned to farming. He continued to farm until his health declined in the spring of 2015. Jewel co-authored the book “Ideas for Farm Mechanics Projects and Activities”.

He was preceded in death by his parents William and Adele Jenne; his wife, Geraldine Jenne in 1981; 2 grandchildren, Maci Heischmidt and Baby Boone; his brothers, Harold and wife Selma (Rothe) Jenne , Laverne and wife Martha (Balster)Jenne ; his sisters , Marcella Griewe and husband Herbert, Velma Wiese and husband Lester, and Loretta Jenne; his mother-and father-in-law, Frederick Sr. and Marcella (Pausch) Stilt; his in-laws, and Frederick Jr. and Carolyn(Eller) Stilt.

A funeral service will be held at Messiah Lutheran Church in Carlyle at 10:00 A.M. on Saturday, September 24, 2016, with Rev. Leonard Laetsch, officiating. Interment will follow at St. Peter Lutheran Cemetery near Carlyle. Visitation will be held on Friday, September 23, from 4:00 – 8:00 P.M. at Zieren Funeral Home and on Saturday, September 24, from 9:00 – 10:00 A.M. at Messiah Lutheran Church. The family suggests memorial donations to St. Peter Lutheran Cemetery, and they will be received at Zieren Funeral Home.