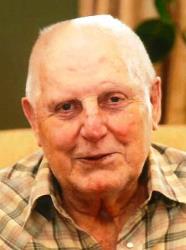 Mr. Beckemeyer was born on January 15, 1929, in Wheatfield Township in Clinton County, Illinois, a son of Fred and Amanda (Steffens) Beckemeyer. He married Wilma Junker on February 9, 1957, and she preceded him in death on November 19, 2000.

Robert was a grain and dairy farmer and he loved to collect antique farm equipment. He was a member of the Southern Illinois Antique Power Club and also a member of the Independent Order of Odd Fellows. Mr. Beckemeyer gave 27 years of leadership and service to the Wheatfield Fire Protection District as a fireman, officer and trustee. He was a member of Immanuel United Church of Christ in Carlyle.

A Funeral service will be held at 10:00 A.M. on Saturday, September 10, 2016, at Immanuel United Church of Christ in Carlyle, with Rev. Ken Schafer, officiating. Interment will follow at Yingst Cemetery near Carlyle. Visitation will be held at Zieren Funeral Home on Friday, September 9, from 4:00 – 8:00 P.M. and at Immanuel United Church of Christ on Saturday from 8:00 – 10:00 A.M.

Expressions of sympathy in memory of Mr. Beckemeyer are suggested to Immanuel United Church of Christ or to the Wheatfield Township Fire Protection District and will be received at Zieren Funeral Home.