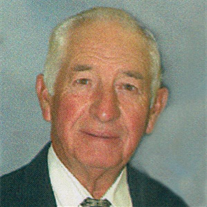 Wilbert L. Weis was born at St. Joseph Hospital in Highland; he grew up on the Weis family farm northwest of Pierron, IL. He attended Immaculate Conception Catholic School in Pierron. Willie served with the U.S. Army from 1957-1959 with the Second Armored Calvary in Bamberg, Germany. He finished his reserve duty in 1965.
Upon returning home, he married and he and Anna operated a dairy farm, until 1965. He briefly sold farm machinery, worked for Farmers Equipment in Trenton, worked at Wicks Organ Factory, Broadway Battery and Tire and Drda Electric. As a sideline, he raised hogs from 1973 into the mid-1980’s. In 1972, he started working part-time for the iron workers, became full-time shortly thereafter and retired in 1997.
He enjoyed playing cards (Jass, Pinochle, Rummy, etc.); golfing, bowling, fishing/hunting and pitching horseshoes. (He started the league in Pierron and pitched for 43 years only missing one match.) He had also enjoyed boating and water skiing. He spent hours volunteering at Pierron Park and helping at the church.

Memorial contributions may be made to P.I.C. Park or Immaculate Conception Catholic Church.