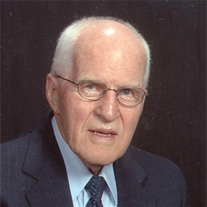 Donald Clarence Jordahl, 86, passed away at 11:00 pm on Wednesday, October 12th, 2016 at Helia Healthcare of Greenville. His visitation and funeral will be held at the Greenville Free Methodist Church on Sunday, October 16th with a visitation from 1-3 pm followed by funeral service beginning immediately after.

Donald was the son of Clarence and Lillian (Bosshardt) Jordahl, born on December 4th, 1929 on their family farm near Nerstrand, Minnesota. He attended the public schools in Verndale and Wadena, Minnesota, graduating from Wadena High School in 1948. After completing high school, he attended St. Paul Bible Institute for a single year before moving on to work at Pillsbury Mills as a bookkeeper for the next two years. In January of 1952, Don enlisted in the United States Air Force and served until September 1954 in French Morocco during the Korean War, working as a bookkeeper. Upon his discharge he was awarded the National Defense Service Medal. Following his military service, he attended Greenville College from 1954-1957 where he was fortunate to meet his wife, LaVon Krober.

Donald and LaVon were married on June 9th, 1956 in McPherson, Kansas which was officiated by a close family friend, Bishop C. V. Fairbairn. After the marriage, Donald went on to attend school at Nazarene Theological Seminary in Kansas City, Missouri where he was awarded a Bachelor of Divinity Degree. During those summers, Donald also attended Kansas State Teacher’s College of Emporia and was awarded of Master of Science Degree. He was later appointed to the Free Methodist Church in Alexandria, Minnesota where he pastored for two years. Upon receiving a call from Greenville College, Don chose to move his family to Greenville, Illinois to take a position as a Professor of History. During his long and celebrated tenure at Greenville College of 32 years, Don also received his Doctorate Degree of Philosophy from SIU Carbondale.

Memorials may be made to Greenville College, The Greenville Free Methodist Church or to Durley Camp, all of which were dear to Don’s heart.