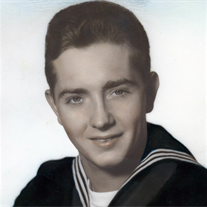 A public gathering of friends will be held from 1 until 3 p.m. Sunday, October 23, 2016 at the Donnell-Wiegand Funeral Home in Mulberry Grove. For those who desire memorials in Donald’s memory may be made to the Family at the Funeral Home.

Donald Wayne Eyman, the son of Claude Roscoe Eyman and Irma Geneva Voris Eyman, was born on January 10, 1943 at the Eyman farm near Pittsburg, Illinois. Donald was raised there and attended the Seminary One Room School, Vandalia Junior High School, and graduated from Vandalia High School in 1960. Donald answered his country’s call by joining the United States Navy on August 29, 1960 in Mulberry Grove. He rose to the rank of E-5 and served aboard the USS Currituck. He was in the Navy for 4 years, 11 months, and 1 day being honorably discharged on July 29, 1965 at the US Naval Station at Treasure Island in San Francisco, CA.
Donald worked for the Edwardsville Intelligencer for 35 years as printer and later as press man retiring in 2005. He and his family lived in Bethalto for a time before returning to Mulberry Grove for the past 35 years.

Donald is preceded in death by his parents Claude and Geneva Eyman, and by two brothers: Lloyd Eyman and Robert Eyman.