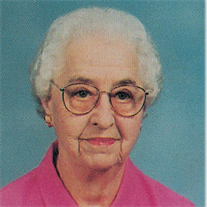 Dorothy was born in Highland, the youngest of 8 children. She was a member of the first class to graduate form St. Paul High School in 1930. She took care of her parents for several years. She and her husband lived in Breese, IL. She worked for St. Joseph Hospital, Breese, in the laundry department for 12 years. She retired in 1983 and move to Highland on October 18, 1989. Her hobbies included playing cards (monthly card club playing Pinochle), embroidering, quilts, needle work and knitting. She was a great cook, especially pies and desserts. Family meals were a tradition.

Interment will be at St. Dominic/St. Augustine Catholic Cemetery in Breese, IL.

Memorial contributions may be made to Saint Paul School Educational Foundation.