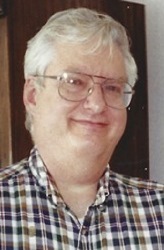 Gary G. Hoffstetter, 71 of Greenville, Illinois passed away Friday, October, 28, 2016 at St. John’s Hospital in Springfield, Illinois. Born December 27, 1944 in Broken Arrow, Oklahoma, he was a son of the late Mr. & Mrs. Wilbur Hoffstetter. He married Barbara J. Friedman on March 14, 1970 in Greensboro, North Carolina and she passed away on August 11, 2013. He retired as an Electrical Engineer for Southwestern Bell in Dallas, Texas. Gary was a caring and loving father and grandfather. Helpful, a volunteer, and he was always thinking of others. He was known as a smart man and a wonderful singer. He was also a Scoutmaster for Troop #641 at the Ross School in St. Louis, Missouri. In addition, he was a member of the United Methodist Church of Greenville, Illinois and an active member of the Okaw Valley Amateur Radio Club.