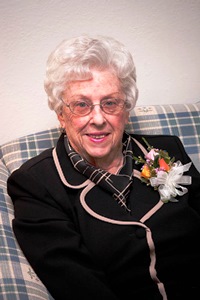 Genevieve W. Malan, age 93, passed away Thursday, October 27, 2016 at her home at The Glenwood. Funeral services will be held Monday, October 31, 2016 at 11 AM at The Greenville First Christian Church. Burial will be in Mt. Auburn Cemetery. Friends may call Monday, October 31, 2016 after 10 AM at the church. Memorial contributions are suggested to The Greenville First Christian Church or Bond County Hospice.

She grew up in Carlinville and Hillsboro. She moved to Greenville with her family and she graduated from Greenville High School. She attended Stephen College in Columbia, MO and also The Frances Harrington School of Design in Chicago, IL. She served as Greenville City Clerk for a time. After her husband retired they travelled and eventually moved to Apache Junction, AR for a while. They moved back to Greenville to be near family and friends. She had been a member of the Bridge Club and also The Pierian Club.