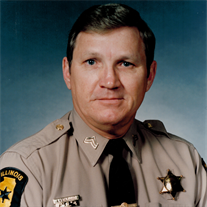 On February 22, 1964, he married Donnetta Robinson at Granite City, IL. She survives in Marine, IL .

He was a member of Fraternal Order of Police Chapter 41.

Larry was born and grew up in Granite City, IL. He graduated Granite City High School in 1960. He joined the US Marine Corps with duty in Okinawa and the Philippines as a Lance Cpl. For 3 years he worked at McDonnell Douglas Aircraft. On 3/28/1966 he joined the Illinois State Police. He retired a Master Sgt. on 1/31/1993. He served in Districts 3 and 11. He retired Area 4 Command as Command Master Sgt. He started the District 11 Evidence Room and managed it for 4 years. Larry remodeled his home, enjoyed reading and working in the garden. He traveled to the Western States and visited the Marine Corp Museum in Virginia. Larry collected Marine Corp. memorabilia and he loved his dogs Teddy and Molly.

Funeral service will be at 10:00 AM on Tuesday, October 11, 2016, at Spengel-Boulanger Funeral Home in Highland, IL., with Pastor Jamie Lee officiating.

Memorial contributions may be made to BackStoppers.