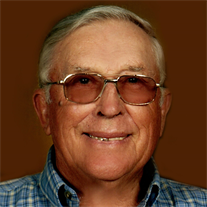 Mr. Wiegmann was an avid farmer and retired after 32 years working at Scott Air Force Base. He was a veteran of the United States Army and a Purple Heart recipient for having served in combat in the Korean War. He was a devoted member of St. George Parish in New Baden, the Albers American Legion Post 1026, Knights of Columbus in New Baden, Clinton County Farm Bureau, and a Life Member of the Disabled American Veterans Chapter 100 in Trenton.

Robert was a devoted husband, father, and grandpa. He was happiest when on the farm, spending time with his family, and tinkering in the wood shop. Robert loved animals and playing his harmonica.

Funeral Mass of Christian Burial will be held at 10 a.m. on Tuesday, October 4, 2016 at St. George Church in New Baden with Rev. Gene Neff officiating. Burial with full military honors will follow at Resurrection Cemetery in New Baden.

In lieu of flowers memorials may be made to Hospice of Southern Illinois, Alzheimer’s Association, or to the charity of the family’s wishes and will be received at the funeral home.