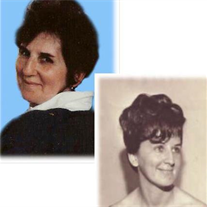 She was a member of Parkinson’s Support Group at Bond County Senior Center, Greenville, IL.

Sharron was born and reared in Greenbrier, MO. She later moved to St. Louis in 1942. She was a 1959 graduate of Cahokia High School. She worked for Rawlings Sporting Goods in St. Louis as Executive Secretary for 10 years. She worked for Mallinckrodt Chemical in St. Louis. She moved to Highland in 1981. She loved to dance. She enjoyed reading newspapers, magazines and working crossword puzzles. She spoiled her daughter and grandchildren. She traveled to Jamaica, Puerto Rico, Thailand, Italy, Paris, Wales, London, Puerto Vallarta and all 50 states including Hawaii.

Memorial contributions may be made to Hospice of Southern Illinois.