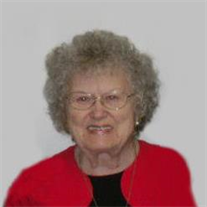 She was born on Sunday, December 08, 1929, in Highland, IL, the daughter of Albert and Edna (nee Scheyer) Hundsdorfer.

She was a former member of Troy United Methodist Church; St. Jacob United Church of Christ.

Zelda was born in Highland, grew up on Deck’s Prairie Northwest of Highland. She moved to St. Jacob in 1936. She was a 1948 graduate of St. Jacob High School. In 1950’s, she worked for Moulton-Bartley Shoe Factory in Highland; and a shoe factory in Trenton. She devoted her like to her husband and daughter. Zelda had collected 100’s Salt and Pepper shakers. She was a big Elvis Presley fan and collected his memorabilia. Zelda and Glen were always together, wherever they went, everyone recognized them beacuse they wore cowboy hats and boots.