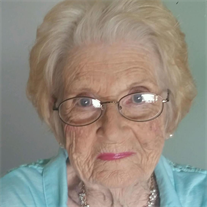 She was born August 13, 1920, in Iberia, MO, the daughter of Frederick and Hattie (nee Derixson) Jarrett.

Edna was born at Iberia (Miller County), Missouri; at age 3 she and her family moved to Granite City, IL where she grew up. Following her husband’s return from WWII, they moved to Marine. She attended beauty college in East Saint Louis; she opened her own shop in 1956 and retired as a Beautician in 1986. She enjoyed sewing, quilting and doing fancy work. In 1985 she was appointed the Representative of Colorado for Illinois and in 1986 was appointed Grand Warder for the State of Illinois – Order of Eastern Star. She traveled over 90,000 miles in assisting every Eastern Star Chapter in Illinois during her tenure. She had been a Girl Scout Leader when her daughter was young.