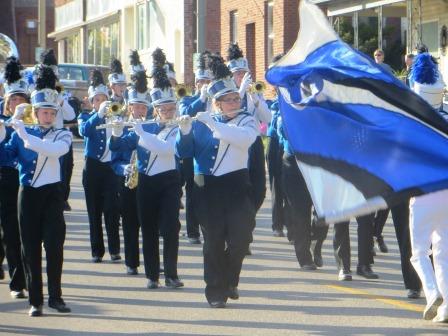 The Greenville High School marching band will participate in the St. Louis Thanksgiving Day Parade this year, as they have for several years in the past. Band Director Ryan Thomason said this will be a special year for the band.

The band will be a “featured” band this year, meaning they will get to perform for a full two minutes for the cameras in front of Union Station, rather than just playing as they march. The parade will be aired on KMOV at 10 AM Thursday morning.

Thomason said the band may also receive some recognition for their annual involvement in the blanket drive associated with the Thanksgiving Parade. It’s possible that a TV crew will come to Greenville to film a feature on the school, since they have been one of the biggest contributors to the blanket drive over the years.

If you’d like to donate a blanket for the school to take Thursday, you can drop it by Greenville High School through Wednesday.

The Greenville High School marching band will be #41 in the parade lineup next Thursday morning and they will be the fourth band in the parade.