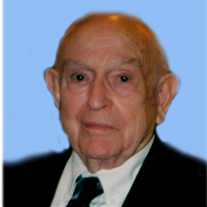 He was born on Thursday, January 22, 1920, in Hagarstown, IL, the son of Wood and Bessie (nee Browning) Lyerla.

He was born in Hagarstown, IL. His family moved to Greenville, IL, in 1929 and subsequently moved to Pocahontas, IL, in 1933 where he began high school, graduating from Pocahontas High School in 1937. He attended Greenville College and McKendree College. He taught rural school in Bond County for two years. After marriage he and his wife lived in Collinsville, IL, where they reared their four sons. He was drafted into the US Army and served active duty during WWII. After returning in late 1946, he worked at the Army Finance Center in St. Louis, then Granite City Depot before going to work for the NY Central Railroad as a locomotive fireman in 1948. He loved working for the RR and was promoted to locomotive engineer in 1953 and worked in this capacity for the NY Central and Southern Pacific railways until his retirement in 1981. After retirement he enjoyed traveling by Amtrak with his wife to see their sons in California and Wisconsin. He loved entertaining his many grandchildren. He was an avid basketball fan, faithfully following the Collinsville Kahoks and University of Illinois. He remained a devoted Cardinal Baseball fan until his passing. He and his wife moved into Legacy Place, Highland, May 10, 2010, as the first residents.

Private Interment will be at Fairlawn Cemetery in Vandalia, IL.

Memorial contributions may be made to United Methodist Church, Pocahontas.