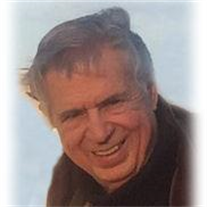 He was a member of Machinist Local 837 @ Boeing.

John was born in Highland, IL; attended St. Paul School. He worked at the Spengel Furniture Store. In 1965 he began working for McDonnell Douglas, now Boeing; he worked there for 45 years as a carpenter. He liked collecting antiques. His daughter was the “apple of his eye”

Funeral service will be at 10:00 AM on Wednesday, December 28, 2016, at Spengel-Boulanger Funeral Home in Highland, IL., with Rev. Msgr. David L. Peters, Pastor Emeritus, officiating.

Memorial contributions may be made to Hospice of Southern Illinois or St. Joseph Hospital Foundation.