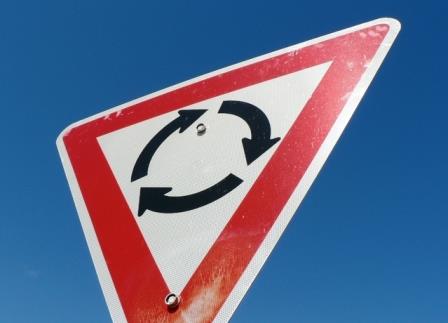 The City of Highland is getting its third traffic round-about, probably in 2018.

City Manager Mark Latham told WGEL Highland has been awarded $990,000 for the round-about, which will be built at the intersection of Iberg Road and Broadway, on the east side of the city, near Veteran’s Parkway. He said since the opening of Veteran’s Parkway, traffic at Iberg and Broadway has picked up, so constructing the round-about at that location will be a safety move.

Latham said the federal money, coming through the state safety fund, is available now. The city will have to cover 10 percent of the costs, which will be accomplished using Highland’s existing sales tax that is pledged to roads.

The city manager hopes construction can begin by mid-2018 and if that occurs, Latham believes the round-about could be completed before the end of that year.

Latham feels the round-about will make a nice entrance into Highland from the east and he is looking forward to it being completed.

The Highland city manager said the city’s two other round-abouts, at Troxler and Rts. 143/160 and Poplar Street and Broadway, have been very successful.